A great year for tomatoes here at 6700 ft. I got seeds started late since we were traveling, and didn’t get seedlings hardened off and planted until the first week in June.

I ordered Black Krim and Cherokee purple plants from Seed Savers Exchange. The plants arrived looking very healthy and were set with the others to harden off.  From Victory Seeds I started Cancelmo, an indeterminate tomato described as being good for sauces and dwarf tomtato Purple Heart. Victory Seeds is a grower who offers dwarf tomatoes developed by  Craig LeHoullier and his colleagues around the globe during the past ten years. Craig is currently working on a book about the Dwarf Tomato Project.  You can follow his work and expertise at his website https://www.craiglehoullier.com/

I also was honored to get some seeds which Craig is trialing. I grew 3 of his selections and was very happy with all three. Two were dwarfs from the Lampy and Speckly line. One was an indeterminate called Chocolate Stripes which was sent to him by a friend.

Chocolate Stripes is beautiful when green — and ripe.

Germination was good for all tomatoes, so I selected the sturdiest to continue on to maturity. This task is quite difficult for me, but I only have so much room!

Growing tomatoes in Colorado is challenging due to our cool summer nights and hail. Tomatoes do not like being hailed on by any size of the frozen balls from the sky. My handy husband designed and built a hail hoop from pvc pipe and hailcloth, which is a woven fabric which protects from most hail, and lets in a lot of light.

My tomatoes are all grown in containers. I have used the self watering earth boxes for several years and been happy with the results back in Raleigh, NC, but thought tomaotes needed some kind of additional protection to keep the temperatures warmer at night. A greenhouse is financially out of the question for this year, what to do?

I was poking around on the interwebs looking for something besides the tried and true Wall-O-Waters, when I saw something from Gardener’s Supply that looked promising — popup grow bag accelerators. Gardener’s Supply described them as a mini green house.   I liked the idea of collapsible storage and a zipper top that would help hold in more heat. and maybe provide some hail protection. I decided to order several and their tomato grow bags with a plastic cage style tower.

I decided I would leave the grow accelerators in place all season to help keep the plants warm at night. It was tricky to rig them up on the earth boxes, but it sort of worked.   I had great fruit set from all the dwarfs. They did get a bit confined as they grew and some fruit was misshapen due to the pressure of being pushed against the walls. The indeterminates just grew out the top and I didn’t have the fruit compression issue.

Dwarf tomatoes with grow bags tied down in hot weather on left.  Indeterminates growing out of the top of the bags on the right.

I used Earth Box fertilizer packs non-organic and Espoma Tomato Tone in the grow bags.  I watered daily by hand. Black Krim and Cherokee Purple were delicious and produced large fruits all season.  Chocolate Stripes was beautiful as well as tasty with somewhat smaller fruits.  Cancelmo surprised me with huge 7-8 ounce fruits.  They were great sliced and many ended up in the freezer for winter soups and sauces. I’m definitely going to grow Black Krim and Cherokee Purple next year!

On October 14 a hard freeze was forecast, so I harvested the green tomatoes that afternoon. 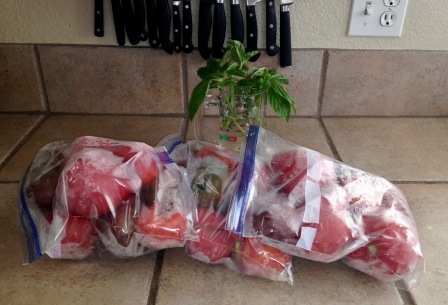 Saved from the deep freeze

Tomatoes into the freezer and tomatoes saved from the deep freeze.

Most of them ripened well in a box on the floor in bright light giving us flavorful tomatoes well into November!   We have recently made tomato soup from the bounty in the freezer.  I’ll be working hard to make 2019 and even better harvest. 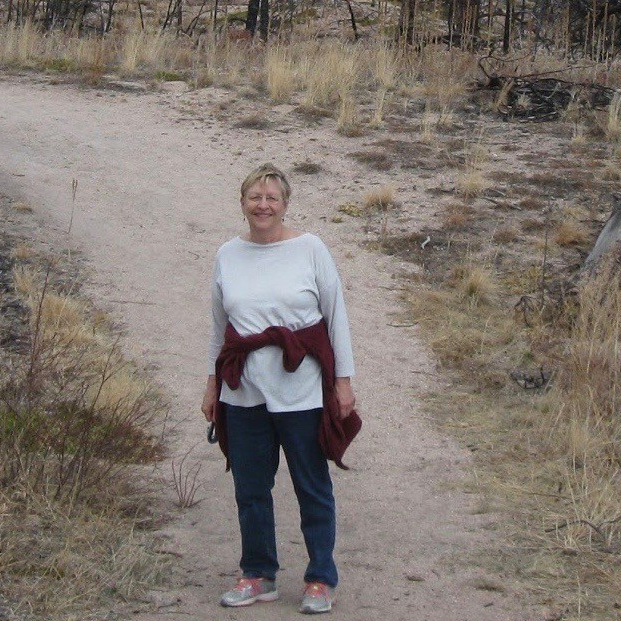 Welcome to apikespeakgarden. I write about creating a landscape that’s beautiful, waterwise, and friendly to wildlife. Don’t be surprised to find posts about the beauty of Colorado, nature in general and other garden related musings.